A good while ago I wrote a blog post about Scott & how he acts when I bring him down around the yard to help me out with Dante. In the space of possibly 2 months, he has grown up (not only gotten taller) but he has come out of his shell quite a bit also!!

I am certainly noticing the change in him around the yard, around Dante with all the different jobs I do regarding cleaning out the stable etc.

In my last blog post Kids & Young Horses he was not exactly fond of Dante, but tolerated him when he came up. Giving him the odd rub on the nose was a rare thing for him to do, but how things have changed!!!

To put it simple, everything is now about using the shovel & making sure Dante has fresh water….

Have a read below!

I am not sure if the shovel obsession is a ‘boy’ thing or if he genuinely enjoys shoveling up the horse poo, But I know for a fact that he only likes to get Dante’s water as it gives him that quick 5 minutes to play around with the water buckets, with the occasionally bucket thrown to the ducks. Any excuse for him to be around water and he’s in!! At the yard he knows giving water to Dante is a must so he always gets the chance!

He Is not so fond of sitting in the wheelbarrow, or going for wheelbarrow rides so much anymore either, maybe it was all the straw he used to find stuck in the crevices of his clothes hours afterwards! Insisting on wheeling the wheelbarrow himself is his new thing, he does tend to give up after 2-3 minutes in, getting distracted by the ducks or wanting to go run off ahead getting up to god only knows while I struggle to push the wheelbarrow to the muck heap like a normal person!

Jumping in all the clean straw while I struggle to cope with trying to get a wheelbarrow full for Dante’s stable is a new obsession! You’d swear he had never seen a bouncing castle in his life, when Dante’s stable is refreshed and all fluffy with new clean straw Scott’s enjoys running and jumping into the middle of it! Why he does this, I have no idea but he ensures me that its great fun, so why not let him enjoy it! (it keeps him quiet!!) 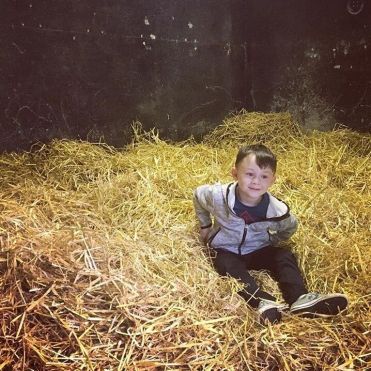 Around Dante, he is getting SO BRAVE!! I still cant believe it. He has started to ask me to brush Dante to make sure he’s clean. Of course at first I was quite skeptical, as he has never showed much interest in Dante before,  thinking will he actually go in and brush him, but he did, with me very closely by his side. I still l cant get over how quiet Dante is around Scott, it’s as if he knows there is a little person around!

Keeping in mind that Scott thinks its GAS to start brushing my hair after he brushes muck from Dante which is not ideal, so I’m not exactly encouraging him to groom him too often!! 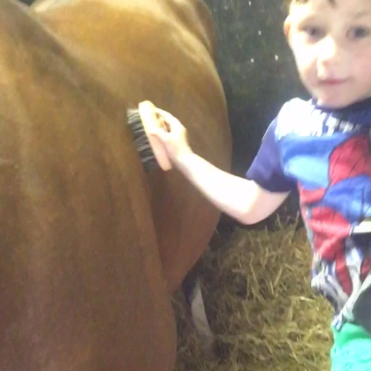 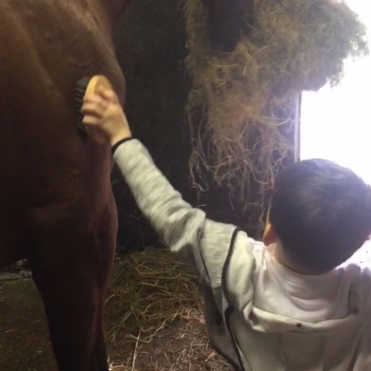 Leading Dante in from the field has become a lot easier. Scott used to hide behind the closed gate to the field waiting on me to come back with Dante. He now helps me lead him in from the field holding the end of the lead rope.  He even talks to the horse asking him if he’s okay, and tells him he’s a good boy when he stands still while he pets his nose! Its lovely to watch the two of them together.

Scott has started coming into the field with me to get Dante, and Dante will straight away walk over to him! Scott does wait for me before he goes over to him to rub his nose, which is not a bad thing considering you never know how unpredictable horses are going to be! Scott is still is a little jumpy around him when it comes to certain things but to be fair the horse is a giant, so I wouldn’t blame him!!

He has a few favorite horses that he insists on petting before he goes home whereas before he would genuinely scream in a horses face if it came near him or leg it to the car to get home! He has even started asking to come down & watch how I ride Dante, it all makes me wonder if he will be ready to get started with some horse riding lessons of his own.

Only time will tell!

But for now, I am happy with how comfortable he is getting down around the yard and around Dante & the horses. It is becoming a part of his routine and gets him thinking about having to feed Dante and everything that is involved with looking after him!

Have you got any stories about your kids down at the yard around your horse? Or have you any way to keep them occupied at the yard?

Let me know! We do have our bad days where he doesn’t want to step foot in the place!