A few weeks ago, if not longer, I had a lesson booked with Sue. I had just come back from The Munny Trail and I was telling Sue all about how good he was and how brave he was when it came to jumping XC fences. So with that we decided to  keep the good memento going with Dante and head out to the Cross country field for our lesson!

I haven’t done much when it comes to Cross Country with Dante to be honest, he was so difficult at the beginning, it took a good while for me to build up that confidence with him & to trust him. It was very clear to not only me but to anyone who had ridden him out in the fields, that it was where he loved to be, anything but arena work and he was delighted. Myself on the other hand, I was out of my comfort zone.  Jumping out in the field, there is just so much space, and so many opportunities for Dante to run free I was 100% shitting myself!! 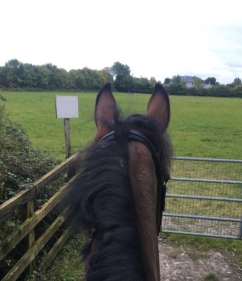 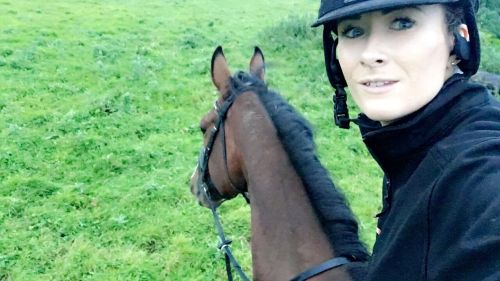 As we entered the field, Sue got me to straight away bring him into a trot, trotting on each rein, then bringing him up into a canter. As I was cantering I kept getting shouts from Sue to push him on, pick up the canter, get more power into it. Dante had it, I was just holding him back as I was quite nervous! The more I pushed him on, the more I began to ease and trust him.

After our warm up, Sue came over, and ran through a few things I would need to learn when it came to eventing or running through a Cross Country course. Firstly, my stirrups needed to go up a hole. Secondly she had noticed how happy Dante was out in this environment, and as I was still in the stage of riding him with draw reins, she quickly told me that today was the day. The draw reins are coming off. It was like I was taking the stabilizers of my bicycle.

Sue ran through the basics, she gave me a quick brief on approaching a fence. In terms of what I should do. I had to ride in the two-point position (My legs hated me) on my approach to the fence, or should I say in fact during the duration of the course. I wasn’t to ride it like a show jump, instead let Dante flow into the fence, pushing him for that long jump where needs be. Most importantly, keep a contact, keep him straight to the fence, and keep him moving.

This was quite difficult, I felt myself checking him two/three strides away from the fence, and instead of letting him go for it, he was getting in deep. After 4/5 attempts, I realised it was mainly down to my nerves. I just had to sit there and let Dante do his thing. I needed to trust him, and the minute I did he jumped the fence perfectly.

Approaching a cross country fence, is not quite the same as approaching a show jump, It got quite over whelming at the beginning, but the more I done it the more I relaxed & really began to enjoy myself!

Moving on from doing single fences, we moved onto  jumping a bank. This consisted of uphill jumping, a step up and then down over two logs. This was challenging. I am such a whimp when it comes to heights, one of my biggest fears and being up on Dante just adds height to everything! 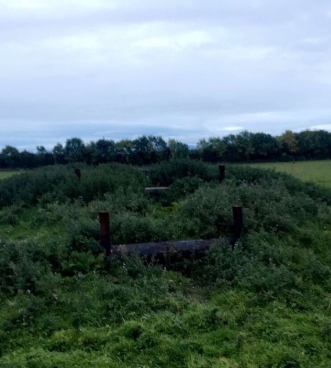 Upon approaching the bank the first two times Dante was completely over whelmed and sceptical of it. The grass around it was slightly over grown, so it probably didn’t help. Third time around and we got over it, I really had to hold him into it at first with strong leg on to re-assure him about it. As soon as I came out over the other side, I was shouting with excitement! We had done it. Being in the cross country field is competently out of my comfort zone, but this small bit of progress was exactly what I needed, not only for my confidence but for Dante’s also not to forget that we were also going draw rein free for the first time in I would say 2 months!!

Sue noticed my in-certainty with going up the bank, and decided to leave it at the with the bank, instead we started going over it side ways as the hills weren’t as steep, It was a great confidence builder as we incorporated it into our course at the end of our lesson, with zero hesitation from myself or from Dante. 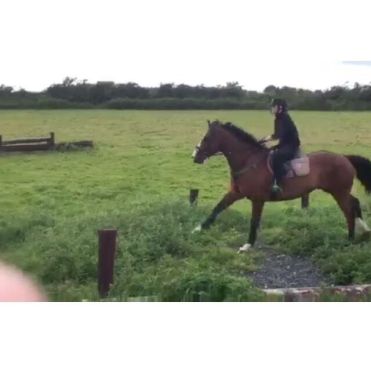 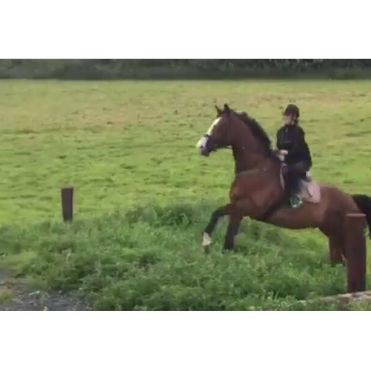 I got quite confused when it came to the terminology Sue was using to describe certain parts of the course. (Note to self, dont just nod & agree as if you know what your instructor is saying!!) The word Question was used a lot. A question would be considered one of the difficult parts of the course. When you approach a combination of fences, or fences with horrific turns, a question relates to those jumps where you have to step back and think about your approach, work out the best route before you ride it so you avoid any casualties. Basically setting your horse up as best you can to clear the fence.

I really had to ‘question’  things when it came to the combination we were doing next. It was really important to have a good line into the jump I was doing next. This was especially important as it was a combination involving two tyre jumps at a slight angle, and going slightly down hill.

My striding was the second thing I had to look for. Sue was great in explaining and pin pointing my take off point, so this was a massive help. Dante got quite excited upon approaching the fence first time around, and kind of took off and launched himself at it, making it very difficult for him to get correct striding though the combination into the second jump. To be honest sitting quietly on him was the best thing I could do in this situation.

As I was still riding in the two point position, Sue suggested that I sit deep into the saddle upon approaching the fence the second time around, letting Dante realise he needs to slow down. It worked, but he got sloppy and kind of ran into the first fence, it was like he forgot to lift his legs up & over. After doing this a few times, the concept slowly began to sink in.

Note: If you have a carless horse like Dante, make sure to put XC boots on then during your schooling sessions. Better safe than sorry. Dante wears Front & back padded Boots any time I am out in the field.

After running through all the basics with Sue I thought I was finished but no, there she was standing with a grin on her face, deciding on the course of fences I would be doing to finish off the lesson!

It was a nice course, like a large figure of 8, incorporating everything I had learned but this time piecing everything together.  As we picked up canter & approached the first fence, it was a single fence, followed by two more single fences. The key was to keep that canter rhythm consistant and a forward going pace throughout. Dante met the first 3 fences perfectly, & well I am pretty sure everyone in the yard could hear me screaming and shouting for joy!!

As we came to the next section of the course, keeping in mind I was riding the course in my two – point position, we were jumping over a tyre jump, then going up over a hill and declining down all in canter. I have this irrational fear of going fast downhill, Dante was quick enough to reassure me I had nothing to worry about, he popped over the tyres and over the hill with no hesitations. As we came down the decline, he did begin to change his legs all over the place, but to be brutally honest I think I was gripped onto him for dear life out of fear, so I could of been putting him off balance!!

I continued to push him forward regardless of his leg changing, he eventually changed himself, but as Sue said I really need to stop thinking of this as a show jumping round as It is not! Still in the two point position, the same position I had been in through out the course, as I approached our ‘question fence’ as I now like to call any combination, the ending combination of the course, I could feel Dante bombing it underneath me.

As I done previously I sat back into the saddle to slow him down, and he came straight back to me. We met the first fence perfectly, but he took off slightly to the second fence and got in quite deep but still managed to clear it! Of course dramatic me was shouting and screaming with absolute delight that I even managed to get through that course the minute his two front feet hit the ground over that last fence!

At this stage I was absolutely shattered!! I definitely didn’t realise how much work riding in that two point position took, my poor legs were like jelly. I wont lie, I did have this new lease of life, this new found confidence in myself & with Dante, I was so happy. This was our first time riding without draw reins also after his bold streak and he definitely impressed me!

We strolled back into the yard It was like we both had massive grins on our faces! After going home  delighted with both of our performances, we made a plan to go out for some XC Schooling, so make sure to keep an eye on the blog to find out how we got on!

Will all this practice make perfect? or will we fall & crumble, Who knows!