I was taking a look back through some of our posts over the last few weeks and I realised it’s been a while since I wrote about Coco. A lot has happened since our last post and while you may have kept up to date through our Instagram account, @NoBuckingWayBlog, I thought it would be good to give an update on the little sass-pot that is Coco.

Where we left off…

Last I wrote about Coco, she had developed a really annoying bucking habit which I had put down as a behavioural issue. This meant that I was tasked with the job of showing Coco that I was the one in charge and I wouldn’t take her nonsense anymore. I certainly had a few fun weeks ahead of me.
The first time I rode Coco with my new ‘take no shit’ attitude was a bit terrifying. From the second I got up she spent all her energy throwing her weight around, napping, bucking, spooking – doing everything she can to not work. After a few days of tough riding she eventually started getting the picture and I began to see some progress.
The bucking became much less but every now and again she would explode with energy so I had to learn how to manage that. We had a lesson one evening with Darielle and Dante, we started off very well but out of nowhere Coco threw a buck and took off around the arena. From there I had the challenge of settling her back down so we could continue with the lesson. We ended well but it showed how much work I still had to do. 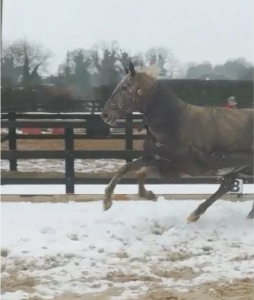 The following week, we were hit with a massive snow storm that stopped me from being able to get to the yard for a few days. Between the storm, the lingering snow and a hectic few weeks in work, Coco ended up having a good two weeks off, which I thought would set us back.
In all that time though, I had made the decision to move Coco to a new yard. The yard we moved to is the same one that Darielle has Dante in. Its much smaller and quieter which I think suits Coco better. Our first week there, I was able to take my time to get both her and myself settled although it helped that we had been there a few times before so it wasn’t a completely new environment for her.

The day we arrived (Monday) I put her straight into her new stable which was ready to go with a lovely big bed and a full haynet. Coco definitely wasn’t complaining. The next day (Tuesday) I gave her a little lunge and then hand walked her out to the cross country field for some grass and a look around. To my surprise, she was incredibly chilled out and not spooky at all. I even lunged her over a small log which she seemed to enjoy! The following day (Wednesday) I decided I’d hop up and give her a short session in the arena. I was ready for an exciteable and spooky Coco as she hadn’t been ridden in a good week or two before this. However instead I had a super chilled and happy horse which was actually a bit of a shock – it seemed she was really taking to her new yard! 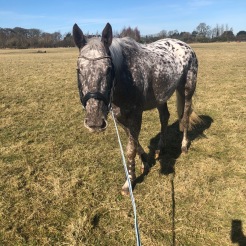 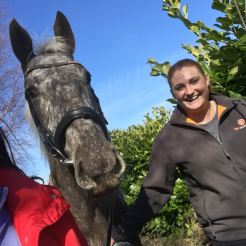 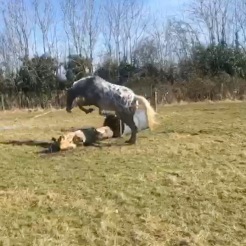 This positive attitude continued for the rest of the week so by the Saturday I decided to do a lesson with Darielle and one of the other girls at the yard. It was the first proper jumping session I’ve had on Coco in months and she was definitely on form. She was jumping out of her skin, so much so that I couldn’t keep with her! It was fantastic to see her enjoying her jumping again. Our only problem during that lesson was me – I wasn’t used to this confident Coco so it took a while for that to click.

From that lesson, I decided to bring Coco back to my old yard for their Easter show. I wasn’t sure how she would take going back to that busy environment especially so soon after we had just moved but she didn’t bat an eyelid, despite the miserable weather. She did her warm up like a pro and jumped confidently around the course. We didn’t go clear but that wasn’t our goal. All I wanted was to get her around the course without any stops and without any spooking and that’s exactly what I got. I couldn’t have been happier with her!

Where are we now?

We’ve been at our new yard now for nearly a month. The first 3 weeks were fantastic – I felt like I had finally turned a corner with Coco. Unfortunately this last week has seen the return of spooky Coco. Its almost like a flick has switched and suddenly everything is terrifying. I’m quite disappointed, I really thought we had turned a corner. At first I thought it was an issue with her feed but even after I did some changing around I still didn’t see any improvement.
We recently had a lesson where we tackled her spooking and I’m finally starting to see some progress. I’m going to cover how I dealt with this issue in a separate upcoming post so keep an eye out for that! 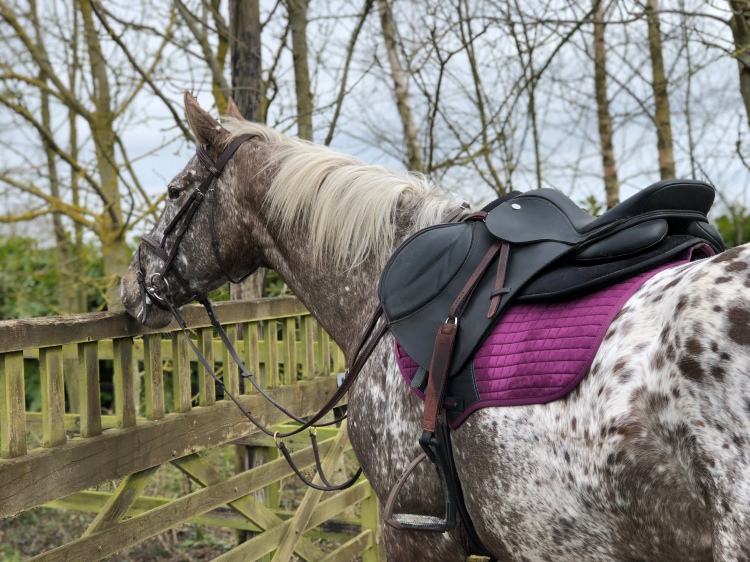 So what’s next for me and Coco? Well, once we tackle the spooking issue, I think its time to start getting out and getting some experience.

So I have a lot planned but if experience has taught me anything its that when it comes to young horses, you can’t bank on anything so even if I was to accomplish just one of these goals, I’ll be delighted!

Thanks for reading 🙂
Orla & Coco