Following on from Darielle’s post last week about how she’s managed to sustain her confidence with Dante, I thought it would be good to look at how I’ve kept mine with Coco.

In the last year that I’ve had Coco, I’ve really found my confidence to be tested. Don’t get me wrong, I’ve had plenty of experience riding young, green or difficult horses but that was when I was 14 years old and long before my 2 year break from horse riding while I was in college. I knew once I got back into the swing of things I’d find my confidence again but when I started working with Coco, it definitely got knocked from time to time.

There were a number of key issues I faced when I got Coco. They’re all very common problems seen in a lot of young horses but I never really thought about how I would deal with them until I faced them with Coco.

As basic as it sounds, this was one thing that has really freaked me out in the past. My lack of confidence with lunging started almost 8 years ago while I was leasing a thoroughbred gelding. I had to lunge him most days before I could ride him and there were days where he just got completely out of control and I didn’t know how to deal with it, so I always had to call someone in to help me.

When it came to Coco, I found she could be very excitable on the lunge as well so I knew I had to just learn to deal with her when she got like that. I’ve had numerous incidents with Coco on the lunge, from simple bucking with excitement and doing laps of the lunge arena in a full blown gallop, to her throwing her legs through the fence resulting in injury. But most recently, I had an incident with Coco that really showed me how much my confidence has grown when dealing with her on the lunge.

As some of you may know from my recent post, Coco suffered an injury to one of her legs a few weeks ago. Last week I decided it was time to bring her back into work with a light lunging session. Since her accident in the lunge arena, I don’t exercise her in there anymore so I brought her to one of the riding arenas. I started her out on the left rein and she was oddly calm and quiet for a horse who hadn’t been in work for 2 weeks. I’ve recently started her on a magnesium supplement so I assumed this was the reason.

When I put her onto the right rein however, she kicked off straight away, bunny hopping to the side and turning herself around so she could go the opposite direction. I instantly felt like I had lost control. This wasn’t the first time Coco had tried this trick so luckily I knew I had to keep calm and move myself around her to get back into a position of control. Once in position, I asked her to move forward again but she was having none of it. This time she started bunny-hopping backwards, running away from me and I suddenly became very aware that she had a full arena to drag me around if she wanted to. I knew I needed to get her onto a circle so I kept walking around to the side of her, trying to get myself in the centre of her body. I managed to get there and was able to get her moving on a tight circle.

She took off in canter for a while and I thought the battle was won. She would canter the freshness out of herself and we could get back to work…but this was not the case. She suddenly stopped dead, turned around to face me head on and started walking towards me trying to make herself as big as possible. I knew she was trying to be the dominant one and there was no way I could let her win so I threw my arms up and told her to get out. She spooked away and took off cantering so again I moved myself back to the position until she realised what I was doing and stopped to try the dominant thing once more. Again, I stood tall as she started walking towards me, stamping her feet so I decided to stamp back. She spooked away on her canter circle again, I moved myself back into position and finally she gave up. She cantered and cantered on her circle, throwing a few bucks here and there as I slowly moved us back to where we started in the arena. Once the fizz was gone I allowed her to trot for a few circles and then back to walk and I finished her there. 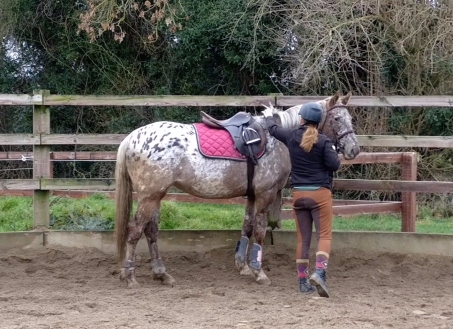 What helped me deal with that situation was remaining calm, remembering what I know about lunging. It also helps that I’ve learned to read Coco over the last year and I knew in this situation she was just trying to get her own way so I had to win this one. It’s very easy for things to get out of control when you’re working with horses on the ground though so if you feel like you’re not getting anywhere then you’re better off stopping and calming everything down (which I have also had to do with Coco in the past). Give your horse a minute to chill, walk up to them, give them a pat and maybe walk them in hand for a minute. When you feel they’ve relaxed, you can try again. It can be very intimidating working with horses on the ground as they are such big animals that can very easily run you down if they wanted to so safety is always the number one priority.

In my opinion, spooking is probably one of the most annoying things horses do. It comes out of nowhere and frightens the life out of you. Coco is definitely one of the spookiest horses I’ve ever ridden. She’ll jump anything but if there’s something that’s not quite right about a bush there’s no way she’ll go near it. It definitely knocked my confidence as I never knew if I was going to be able to make it the full way around the arena without my heart jumping into my mouth from her spooking. I was constantly on edge any time I rode and it became really difficult to school Coco properly because any time we got going, she would spook and I would be back to square one.

So how have I dealt with her spooking? Well the first thing was learning to sit a spook. 9 times of out 10, your horse will spook inwards so one thing I was taught was to prepare your body for the spook by putting more weight into your inside stirrup. This way, when your horse spooks your body is already where its going to end up so you’ve got much less risk of falling. I was sceptical of this at first but it totally worked.

Next, was stopping her from spooking. Everyone has different ways of dealing with a spooky horse, some will show the horse what they’re afraid of so they know to expect it

next time (doesn’t work on Coco), and some will tirelessly drive their horse closer and closer to what they’re spooking at until they stop spooking (also doesn’t work with Coco). The only thing that has worked with Coco is keeping her head bent to the inside so she doesn’t have a chance to look at what’s spooking her because she’s too focused on what I’m asking her to do. Apparently this is a trick used by the Mounted Unit of An Garda Siochana (Irish Police) when training their horses and it definitely works!

Once I knew how to deal with her spooking, I was able to relax and enjoy riding Coco much more.

I find horses who nap just plain rude. They belligerently ignore what you’re asking them to do and try to find the best way of getting what they want. I know they do it for generally understandable reasons but it’s still incredibly frustrating. In Coco’s case, she bunny hops. I remember the very first day I rode her after I had bought her. The minute I put her on a circle she straight away started trying to nap to the gate by bunny hopping. In doing this she flung her head back and hit me square in the face. It really hurt.

And so started my fun journey of dealing with Coco’s napping. She was quite bad for it. Any time I rode with other horses in the arena should would just want to follow them and had no interest in what I wanted her to do. There were days that she was quite dangerous. Being as fiery as she was, she would sometimes take off to the side and bunny hop until she got what she wanted. She never went into a full blown rear but she did go up quite high at times. For a while I really started to get scared of what she would do if I got on her and she wasn’t in the right frame of mind.

As she’s young, I knew I had to find a way of working her out of her napping so I did something that I picked up from my earlier riding days, I faked confidence. It’s amazing how well this works. I in no way felt that I knew what I was doing or if I was even capable of dealing with Coco’s behaviour but I couldn’t let her know that so I would sit tall, boot her on, stick my arse to the saddle and push her until she moved forward!

However there were days when this just didn’t cut it, the minute I mounted up she just didn’t want to work, she would do everything in her power to avoid moving forward and just hop on the spot and throw her head around. She had too much energy so I needed to do something to get her focused and to channel that energy. So before every session I would set out some poles and if I found Coco to be in one of those moods, I would bring her to the poles. I would rarely actually trot her directly over them but instead work her around them in every direction I could. I would keep her steady, tight and bending in different directions so she couldn’t figure out what I was going to ask her to do next. Once I felt she had relaxed I would then bring her away from the poles and see how she was.

This was such a handy trick that I picked up in my time with Coco. I genuinely don’t think we’d have gotten where we are now without this tactic.

Confidence can get knocked by any number of things but for me I’ve found what’s really knocked mine was not knowing how to deal with the issue that knocked it in the first place. Once I knew how to fix the behaviour issue, I felt I was able to keep control and handle the situation much better. And when I didn’t know what to do, the best thing I could do was fake it until I had a better solution. It might not be perfect but it’s gotten us this far!

How has your confidence been tested? And how have you managed to pick it back up again? Let me know in the comments 🙂